Cities are unique entities in that drive economic growth and development. As Jane Jacobs notes in Cities and The Wealth of Nations, “cities are unique in their abilities to shape and reshape the economies of other settlements, including those far removed from them geographically” (Jacobs 32). As such, the development of cities is a necessary component of an economic development plan. One important aspect of a city is its currency, and in Jacobs’ discussion on the importance of city currencies, she eerily predicts the current economic demise that we are seeing occur in the European Union, due to the “nationalizing” of the currency, the Euro. 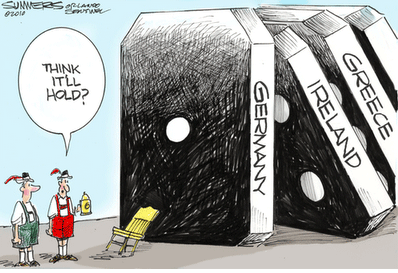 The formation of the Eurozone, and the adoption of the Euro, has effectively consolidated the once diverse networks and unique characteristics of European cities into one network. Looking historically at the use of city-state versus national currencies, Jacobs sums up the discussion as such: “the fact that city-state currencies prevailed widely at times and places where significant development was getting under way suggests that national currencies may be fatally premature in some parts of the world now” (Jacobs 170). This fatal premature-ness has to do with the idea of feedback, an important concept for understanding the how currencies contribute to economic development.
As we are witnessing now, “currency fluctuations are a powerful force, a potent form of feedback control, for good, for ill or for nil” (Jacobs 180). How does this mechanism work? In the process of feedback, as a currency declines, exports increase and imports decrease. This is in effect an automatic tariff. As Jacobs notes, ““if the northern and southern regions of Japan had their own individualized currencies, they could automatically get equivalents of tariffs and export subsidies” (205). Increasing exports should spur more production, and import substitution.
Currency manipulation is a complicated subject matter, that generally causes my brain to hurt when I think about it to much. China’s manipulation of the yuan and pegging their currency to the dollar has been a big political issue. We often hear that a devaluation, a re-manipulation of the currency, will cure our trade deficit with China, and that the pegging has been detrimental to US growth; if a country devalues their currency, exports increase, production, and income increase. But if not coupled with spending less and reversing the fundamental inequality in a trade deficit- then there is no effect on trade deficit. However, this still reveals how fundamentally powerful currency fluctuations are – whether artificially or naturally manipulated.
The success of the Euro seems to be in question, especially given the current financial crisis. Detailed in a recent New York Times article, The Rise of a Euro Doomsayer (new window), Bernard Connelly is extremely worried that the current crisis will drive countries back to civil wars and revolutions, “and that is the future if this malignant lunacy of monetary union is pursued and crushes these countries into the ground.” All of which points us to the fact that currency can be powerful, and needs to be considered in all development policies.