I’ve been trying to write this blog for awhile – yet each time I think I’ve got a finalized draft, more news stories come out on the topic – the topic of a women’s reproductive health. 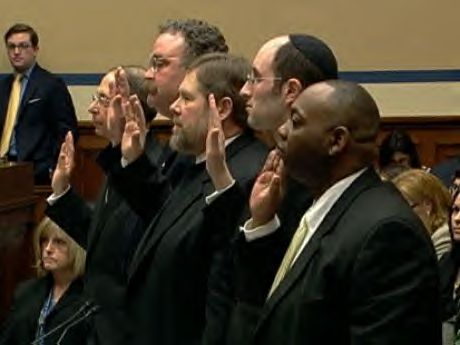 Witnesses for Congressional Hearing on Birth Control from - http://gropingtheelephant.blogspot.com/2012/02/yes-im-cynic-when-it-comes-to-politics.html

Initially I started writing the blog after Susan G. Komen for the Cure announced their decision to withdraw funding for breast exams given by Planned Parenthood (new window) (then reversed it (new window)). But then, Obama announced a controversial policy to require religious organizations to include birth control on their insurance plans. Then, a billionaire backer of Rick Santorum made a comment regarding “proper” forms of birth control that I won’t even dignify by posting here. THEN there was the Senate Hearing about a birth control bill (new window) with zero women involved. Today, politics is dominated by a few select issues, one of those being the issue of controlling a woman’s reproductive health. I have conflicting feelings about this – on one hand I feel that it is a good thing for these issues to be brought into the public sphere, on the other hand, I’m shocked by how ignorant the rhetoric is for such an important issue.
In one of my classes last semester, Prof. Garcia

provocatively asked us if we think America is a developed, or developing country. When listening to the debate about birth control and women’s reproductive issues, I continue to ask myself that question.  As a student who has now studied issues in development for quite a few years, a topic that often dominates the dialogue is the role and health of women in a society. For years, the U.S has preached to developing countries about proper forms of birth control (not aspirin between the knees) and applauded those countries that have worked to reduce average family size. One example, constantly lauded as a success for development is in Kerala, India. After achieving almost 100% literacy for both men and women, the average age for having children increased, and number of children per family decreased. Concurrently, families began to be better off economically. Family size, women’s health, education, and development are all issues that are increasingly proving to be interlaced.

I have often blogged about “practicing what you preach” in development, and how there often is a top-down dynamic where the hegemon dictates to the developing countries norms to strive for. What do all of the above examples reveal about America? Planned Parenthood is exactly the type of organization development practitioners hope to see in developing countries. In developing countries, organizations that enable women to have access to medical care, sex education, birth control, and AIDS medicine, are both the most lauded and successful. For Planned Parenthood, access to reproductive health services is a fundamental right, and PP offers a plethora of services, including: “vital reproductive health care, sex education, and information to millions of women, men, and young people worldwide”  (PlannedParenthood.org). The action of Susan G. Komen for the Cure was an attack on Planned Parenthood, and, thankfully, proud supporters of Planned Parenthood responded. Today, “one in five American women has chosen Planned Parenthood for health care at least once in her life” (PlannedParenthood.org).
Concerns over the ability of a woman to make an informed decision about her reproductive rights will continue to play out in the political and public sphere. What concerns me is that we celebratize families with 19 biological children, and politicians continue to fight about access to services the PP provides – does that make us developed, or developing?