When I arrived on the coast of Maine last Saturday, I had little of note but a comic book, a pad of paper, a short writing workbook, and a fierce determination to make some measurable amount (any measurable amount) of progress towards choosing a topic for my thesis. Imagine my surprise when I arrived home Tuesday afternoon with not only a soft tan, but also a fully articulated — and completely viable– thesis proposal. Sans lit review, of course.

This is the first post in a year long series chronicling the writing of my CCT thesis. I’ll explore the thesis writing process in general, the particular challenges of interdisciplinary research, the intellectual community that is CCT, and my own specific trials and tribulations. This series is part of a multipronged attempt to make the gnovis blog, in its 2nd year, more broadly reflective of the CCT community, and more useful to its students. [The other prongs will begin to unfold during the Fall semester, under the guidance of our new, talented team of New Media Contributors (names and titles T.B.A.)]

Over the past two years, I’ve had a very difficult time coming up with a thesis topic. In fact, my struggles were one of the reasons I dropped my enrollment to part-time, thereby buying myself another 12 months to shop for ideas. There are a number of reasons that I’ve struggled:

At some point last year, I settled on a very vague topic for my thesis — open source software. It’s a topic that I’m passionate about, after years of software development, but one which I’d given little intellectual thought prior to coming to CCT.

But what about it? What would I actually say about open source software that would be new, exciting, worth writing, and acceptable for a CCT thesis? This is where I ran into trouble, and a series of false starts:

This summer, I grew weary of my botched plans to write about open source, so I rehashed the same ideas, first substituting "Web 2.0" for "open source" and then, when that failed, "new media literacy."

Finally, about a week ago, I decided that I had to stop shopping for the perfect idea, and start researching and writing in earnest. That meant committing loosely to a narrow set of topics and chipping away at the literature. So I settled on "Open Culture" (which I’ll define imprecisely as a broader category that includes open source software) and, as a backup, "New Media Literacy." I also set out a few new rules for myself. 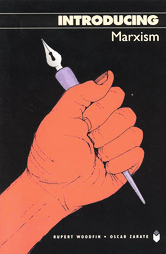 Which brings me, at last, back to the beaches of Maine. I was perhaps a bit disingenuous in my opening paragraph (though only for dramatic effect, of course)…The book I had with me was not truly a comic book, but rather "Introducing Marxism," from the famous "Introducing" series of illustrated academic guides.

I had brought it along to address a specific hole in my background: the lack of a cohesive picture of the development of Marxism and the various flavors of Neo- and Post-Marxism. So I flipped through the book several times over two days, taking notes and jumping around, focusing on making sense of it instead of getting through it.

And it worked. Suddenly concepts like Althusser’s ideology and Gramsci’s hegemony, concepts I’ve long been comfortable with, were more than just Neo-Marxist neologisms describing contemporary media and politics… they were pivotal concepts in the broad narrative of Marxism, attempts to synthesize the conflict between classical Marxist theory and the 20th century failures of Marxist revolution. The dialectics were rendered visible, the narrative made sense, and I was thinking now in terms of intellectual traditions instead of individual citations.

From this very simple but profound transformation of my understanding of Marxism, everything else suddenly fell into place. In my brief 15 minute writing session, on Monday morning, I played with a variety of Neomarxist concepts, from several sources, looking for ways to connect them to my myriad thoughts on open source software.

Like a bolt of lightning, it hit me. I wrote down two lengthy sentences, then stood up and announced to the room "I just found my thesis topic… let’s go to the beach." Which we did.

It’s still not ready for public consumption, but I’m thrilled that, after two full years of searching, I’ve finally got a topic, and pleasantly surprised by my sudden excitement to start my research, which I have dreaded for so long.

This is the 1st post in a year long series. If you have feedback about anything related to this series, or if you’d like me to focus on a particular issue in a future post, please comment below.