A few days ago I was asked about the new full-body scanners that are being used at several airports, including BWI (Baltimore-Washington International). I’m a little embarrased to admit that, though I knew the scanners were being used, I didn’t know the details. After all, one of the core readings in the CCT program (during my 1st year here, at least), was Jeffrey Rosen’s "The Naked Crowd," and these new scanners are exactly what Rosen referred to as The Naked Machine. 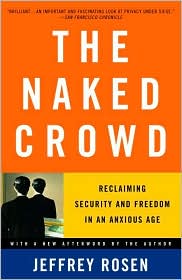 For Rosen, the Naked Machine is a device that renders images of fully clothed individuals as if they were naked, in order to reveal objects hidden beneath their clothes. The version being used by the TSA is called a "millimeter wave scanner."

The privacy concerns with a machine like this are obvious, especially since most passengers aren’t aware of what the device does, and there is no informed consent process in place. (As an extra data point: how many people actually know what is happening when they walk through the puff-of-air machine at the airport? I probably went through it 5 times before realizing that it was looking for traces of explosives in my clothes.)

Rosen, of course, proposes an alternative to The Naked Machine, which he calls The Blob Machine. This would accomplish the same security goals, but morph the image into a generic, anonymous body, so that the privacy violations are less severe.

In my conversation the other day, I recklessly suggested that the new TSA machines might already be using "Blob Machine" technology, when this obviously is not the case, so I want to make up for this by clearing up a few other details, about the things the TSA has done to try to respect individual privacy.

For some, this machine might even be feel less invasive than a patdown, which involves physical touch (ewww).

The bullet points above, however, should not be seen as a defense of this machine. I’m quite opposed to it, both as a misguided waste of money and a propagation of the "Culture of Fear (new window)." Rather, I wanted to clarify how the machine actually works so that travellers can make more educated decisions about whether to opt for a patdown or simply hustle through the machine to their gate.