The Choice Is Yours (sort of): The Cleveland Show or Nothing

Yesterday I watched The Cleveland Show (new window), a spinoff of Fox’s Family Guy. It wasn’t very funny to me. In fact, it was predictable.

Don’t get me wrong. I’m a Family Guy fan. I enjoy its particularly irreverent sense of humor, despite its stereotypical racism. But nothing about The Cleveland Show struck me as funny.

Perhaps it was the stereotypical representation of a single black woman raising a houseful of kids, and being interested in more than one man (yes, a bit of a hoe). Maybe it was the suggestion that this family couldn’t be whole until a man took charge. Perhaps it was the attention drawn to Donna’s “fat ass,” which replicates the American fascination with black women’s behinds as something to be fetishized (see Sarah Baartman (new window)).  Or, maybe it was my irritation with little Rallo being kicked out of Kindergarten (already) for being unruly (and sex-crazed).

These things were frustrating. But I think that my discontent is actually much simpler.
Underlying The Cleveland Show, and much of the programming “about” or “for” people of color on television today is the unspoken understanding that people of color must settle for stereotypical representations or be content to be invisible in the popular media.

My husband recently commented to me that it was irritating to him that we don’t have a good drama series that features black characters. By good, he meant a show that avoids the all-to-easy stereotypes that provide us with cheap entertainment and reinforce the racial/cultural assumptions that are the foundation of our society. What about a black ER? An Arab Mercy? Would it be so weird to have a show with quality writing that features characters of color? Why are most of the TV shows that star people of color comedies, or reality shows with the craziest people walking the face of the earth?

A Huffington Post writer who recently reviewed The Cleveland Show (new window) had this to say: “Still, creating leading black characters, even in 2009 and in a cartoon, is progressive compared to its non-animated and animated competition.” The reviewer is mistaken. There are many shows historically and today that lead with black characters—The Boondocks, Meet the Browns, Flavor of Love, Housewives of Atlanta, The Cosby Show, The Bernie Mac Show. Given that The Cleveland Show is not unique in leading with black characters, is it fair to characterize it, or any of these other shows, as progressive simply on the merits of including black people?

Let’s look at a show that might be considered progressive in black media: The Boondocks. 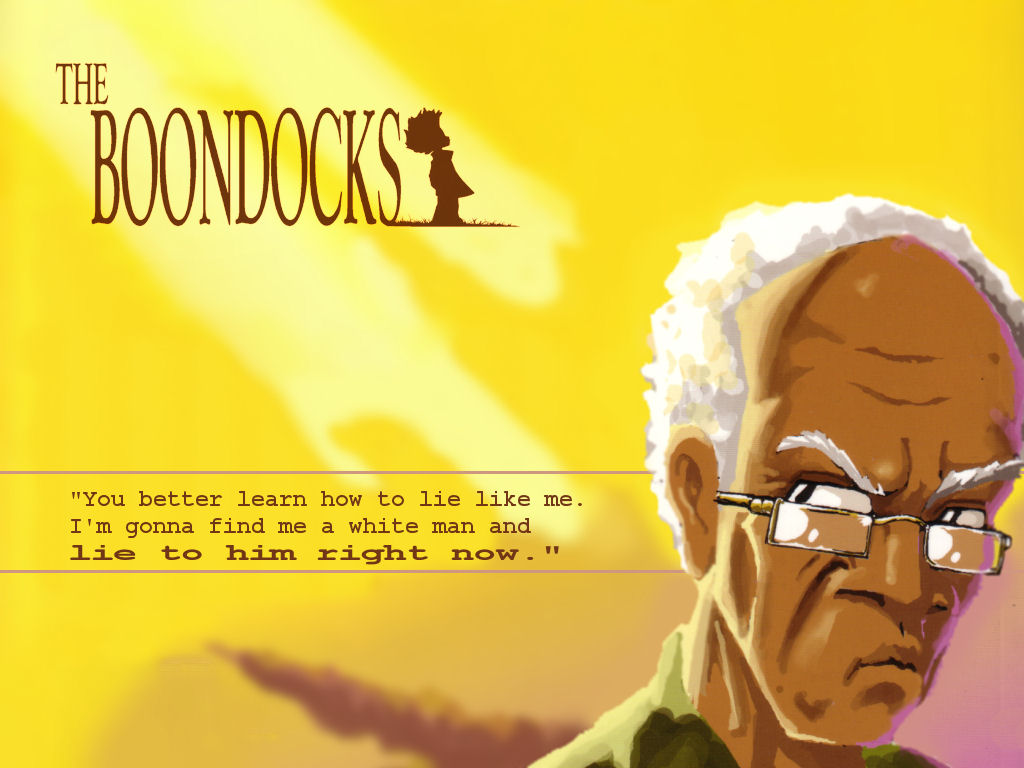 It has a meaningful critique of society. It has quality writing and well-developed characters. And while it is not perfect (Boondocks has been criticized for gratuitous use of the word “nigga”), it is clear that its main characters are cast in a light that makes the audience cheer for them.  Audiences (and especially people of color) watching The Boondocks can actually identify with the characters.  I’d be hard pressed to find someone amongst my acquaintances who identifies with Cleveland.

The Huffington Post writer also makes an interesting comment that sheds light on the issue of representation of people of color in the media:

“The Cleveland Show is not meant to offer a meta-analysis of the state of America’s gender or race relations. It’s a family comedy, with black characters, that doesn’t shy away from off-color jokes, which is as progressive as network TV gets.”

The fact that The Cleveland Show isn’t “meant to offer a meta-analysis of the state of America’s gender and race relations” doesn’t mean race and gender aren’t an important subtext of the show. The obsession our culture has with avoiding open conversation about race means that ideas instead “pop out” in places like popular culture representations. Lots of stuff “popped out” of The Cleveland Show last night.

These stereotypical depictions mask the lived experiences of people of color. There’s no facet of life that people of color don’t enjoy in a similar or even identical way as do white folks. The challenge is to identify and actively resist the systemic and stereotypical structures that guide popular culture representation. What would it mean to have television shows that cast people of color in everyday situations that don’t play off of stereotypes? Can we move from the “othering” of people of color to a critical, open discourse about the role of race (and more broadly, difference) in our society?

For the sake of the viewing public, I surely hope the answer is yes.