I was thumbing through the pages of a recent issue of Newsweek when a full-page ad snatched my attention. The words “commemorative,” “keepsake,” “collectible,” and “one-of-a-kind” adorned the ad, which evoked patriotic rhetoric and powerful imagery. This pitch could have been selling the American people a million things – a model airplane, a stamp collection or a vintage train set. But the pitch – which, upon further review of back issues, appeared in a number of Newsweek editions – was for 21×17 inch framed, matted reprints of the magazine covers at the time of President Barack Obama’s inauguration. Wow! Only $124.95, which includes a forgettable quote from editor Jon Meacham! What a steal! Beyond the sarcasm, I also experienced a feeling of déjà vu. 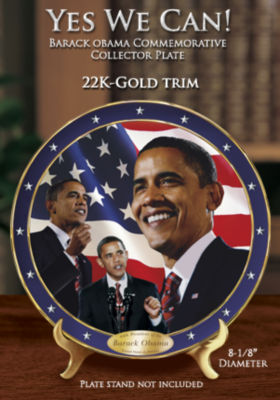 I recalled The New York Times (new window) advertising similar ‘special’ issues in honor of our nation’s first black President, the guy who broke all the barriers. I also recalled a number of anonymous companies offering similar pleas to invest in a piece of history through the purchase of commemorative Obama coins, or a $34.95 collector’s plate (new window). Companies like Franklin Mint (new window) stresses a sense of urgency and authenticity: “This is not a newspaper or a magazine where millions are printed. 135 million voted and only a small fraction of these people can ever own this emotionally stirring commemorative marking a change in history most of us thought we would never see.” Hurry folks, or you’ll miss the boat. Wall Street may have imploded and no one is bold enough to invest in real estate these days but, thankfully, we have our President Obama merchandise to hold stock in.

My question: When did the President of the United States become such a commodity and a vehicle for consumerism? Being alive for just a handful of elections makes it difficult for me to accurately put this into context but others who have taken notice of the gimmicks and opportunists suggest that consumerism hasn’t piggybacked on the presidency like this since the assassination of JFK. We’d be fools to think race didn’t play into the agendas of those looking to make a quick buck on our precedent-setting leader. Framing our President as an investment or commodity is egregious, disrespectful and speaks volumes about our preoccupation with celebrity culture. President Obama is the leader of the free world, not a cash cow. Hmmmm, I wonder what’s worth more — a LeBron James trading card or a Barack Obama coin. Even a determined, hard-working academic such as Obama has fallen victim to society’s stereotypical, pigeonholed framing that suggests successful blacks are merely entertainers or celebrities.

The Obama-inspired entrepreneurs exist on a much smaller scale too, as street vendors continue to line New York City’s sidewalks to peddle pins, stickers and bobbleheads of our new President. But I’m still moved by the sightings — though growing more scarce — of those still donning Obama campaign buttons on their jackets and bags. Watching history unfold on Election Night was my generation’s version of JFK’s death; we’ll never forget where we were and whom we were with at that moment. But as we continue to support the President, let’s make the distinction between pride, patriotism and profit – and resist the consumer-driven merchandising.