It's All About You, I Mean Me, I Mean Hegemony

The 2010 double issue cover comes courtesy of artist Barbara Kruger (new window), whose strategically placed signature red and white boldface text strips over Mark Seliger’s (new window) portraits of Kardashian read: IT’S ALL ABOUT ME, I MEAN YOU, I MEAN ME. Inside the byline follows, “Kim Kardashian can’t sing, act, or dance, but she’s found the role of a lifetime in the fine art of playing herself (1).”

First off, to clarify for anyone unfamiliar, W is a style (read: fashion) magazine published by Condé Nast (new window). Though it firmly positions itself in “the world of style (2)” W has a propensity for supporting highly conceptual editorial work (much more so than other magazines at their distribution level). Since the Art Issue’s inception in 2006, each year the magazine has commissioned an “artist” for their November (art issue) cover, and has to my mind leveraged this space as a platform for furthering the often tenuous relationship between art, fashion, and celebrity. This year, both W’s conceptual platform and Kruger’s rendition of the reality star delves specifically into ideas of fame, creates a multidimensional text which forefronts the presence of ideological power structures, and pushes definitions of art and reality. 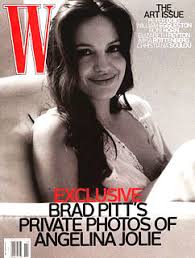 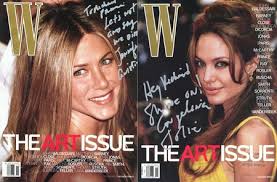 Some previous examples include Bruce Weber’s (new window) editorial of model Linda Evangelista (new window) in 2009 which commented on the downturn of the art market, Brad Pitt’s intimate portraits of Angelina Jolie with their newborn twins in 2008, and Richard Prince’s (new window) edition of 9 unique covers (new window) in which Prince appropriated paparazzi photos and signed messages to himself in 2007.

Something I am drawing from above is the idea of cultural hegemony (new window). Strongly linked with ideas of economics and class, hegemony stresses a negotiated power, one that gains its stamina from the space it comes to inhabit through a flux in “common sense” social ideologies, ideologies which must constantly be reaffirmed in order to be sustained (Sturken and Cartwright, Practices of Looking). Though highly complex, I see employing aspects of hegemony here as a crucial analytical tool, as it deals with ideas of domination, as well as the preservation and perpetuation of societal philosophies (ie: norms and values).

In her editorial spread (also shot by Mark Seliger) a statuesque Kardashian is rendered into a veritable art object; silver and nude she appears to have been dipped in paint and left to cure; the metallic reflection of a testament to her curves (images here (new window)). And as if to push the envelope even further, it has been purported that W’s inspiration for the spread came from artist Jeff Koons (new window) balloon animals (new window) which, if there was anyone in the room when you pulled out the W magazine, “art issue,” their particular allegiance to either art or fashion would surely reveal itself here.

Certainly the viral press on the image is more attune to Kardashian appearing nude (something she is no stranger to) rather than Kruger producing cover art for a fashion glossy (something not necessarily a typical part of Kruger’s practice). W’s amalgamation of Kim Kardashian, nude, as art, on the cover of the “Art Issue” draws not only on Kardashian’s personal life as buxom female and reality star, but forefronts the dualities of art and fashion. The collision of these spaces speaks directly to our ideas of hierarchy (not to mention our ideas of what is art, what is reality), and begs the question: Which is the driving force, the art or the celebrity?