Inherit the Wind: The Smithsonian's New Hall of Human Origins

One of the largest questions we ponder as humans is “where do we come from?”  This idea is explored across disciplines; from the sciences to philosophy to literature and of course, theology.  Last fall, the Smithsonian National Museum of Natural History announced that it is dedicating a new hall to the story of human evolution, the Hall of Human Origins, covering the origin of human beings and how all living things adapt to the natural world.  The Hall’s web site describes it,

“The newly opened Anne and Bernard Spitzer Hall of Human Origins presents the remarkable history of human evolution from our earliest ancestors millions of years ago to modern Homo sapiens. The innovative Spitzer Hall combines the most up-to-date discoveries in the fossil record with the latest in genomic science to explore the most profound mysteries of humankind: who we are, where we came from, and what is in store for the future of our species.”

The hall will open on March 17th, one-hundred years since the museum first opened.  Interestingly, the goal of this new Hall is not to explain, de facto, the course of human history and origin in a strict, scientific sense.  Of course, there are the usual elements of a museum exhibition, as The Washington Post writes, “exhibitions will include 75 cast reproductions of skulls from the past 6 million years, a reconstructed face of Sahelanthropus (one of the oldest known hominids), fossils of early apes and humans, a large exhibit devoted to the human family tree, and a bone bed where visitors can learn about different kinds of fossil evidence.”

But more importantly, the Hall looks to tell a story of how we interact with our world.  “All species on Earth, including humans, are unique. Yet our intelligence and creativity go well beyond those of any other animal. Humans have long communicated through language, created and appreciated art and music, and invented complex tools that have enabled our species to survive and thrive, though often at the expense of other species.”  It seeks to explain our place in a larger (global) ecosystem and is reflective of what distinguishes humans from other forms of life.

The idea of evolution is one that engenders that age-old tension in our culture, one of God vs. science.  Technologies, whether they be medicines, communication devices, or even an understanding of biological processes (these too, I would argue can be considered technologies) have often been seen by some as elements that “help explain” God or “replace” God.  Ideological dichotomies have always posed this dualistic- either science is truth or God is truth.  And while many, perhaps a majority, do believe that the two are not at all mutually exclusive, this tension is deeply rooted in our culture and the ways that we study the role of science and technology in our culture. 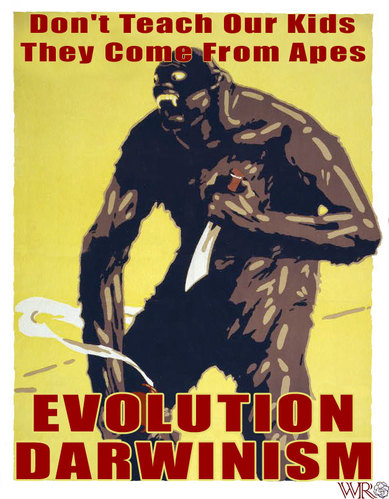 A larger issue surrounding the opening of the Human Origins Hall is a cultural one.  Whether or not one believes the hard science, there is no denying the role of evolution theory in our culture, from education to law to popular culture.  The controversies surrounding creationism vs. evolution in the classroom, the famous “Monkey Trial,” the classic film and play “Inherit the Wind,” politicization of science are all a part of a running American cultural dialogue.  At what point does science become a part of our cultural heritage?  As world heritage?  UNESCO classifies World Heritage as either cultural heritage, intangible cultural heritage or natural heritage.  Natural heritage is defined as, “outstanding physical, biological and geological formations, habitats of threatened species of animals and plants and areas with scientific, conservation or aesthetic value.”  Do biological processes like evolution therefore qualify as Natural Heritage?  And is evolution not only a part of our natural heritage, but cultural heritage as well for all the reasons mentioned above?

From this perspective the Smithsonian’s new Human Origins Exhibit is not only a testament for the wonder of this natural phenomenon- it is a monument for the human pursuit of science, our insatiable desire to discover the most intimate secrets of our world and a celebration of that essential question that we all ask: “where do we come from?”