Josh Hubanks and Colleen Valentine are two of gnovis’ lead bloggers. After seeing Dr. Temple Grandin speak as part of Georgetown University’s Lecture Fund Series, they decided to explore blogging as a venue for further discussion. The result is the first in a series of Digital Dialogues.

JH: Dr. Temple Grandin (new window) is known the world over for her pioneering work as an animal welfare advocate and as a woman living with autism. She has spent her professional career studying the behavior of animals and has worked sedulously to reduce the stress of livestock reared for slaughter. As a lifelong advocate for the humane treatment of animals, I was compelled to see Dr. Grandin speak. Her perspective as a person dedicated to reducing animal suffering, while at the same time working to facilitate animal slaughter, is a fascinating one. To me, the ostensible contradiction of these facts is complicated by the practical ends they pursue: a reduction in the overall discomfort of an animal whose fate is immutable. The emotional sobriety with which Dr. Grandin approaches this subject matter is paramount; it informs a question I posed to her after her speech, and which I will now pose to you, Colleen:

If done effectively, can commercial-level animal slaughter be an entirely human process; or, does taking the life of a living creature always involve some level of inhumanity?

CV: Yes, taking the life of a living creature always involves some level of inhumanity, yet I believe that the work Dr. Grandin does is of paramount importance. She understands the necessity of creating an environment that nurtures animals, and as she put it, provides them with a life worth living. As someone who does eat meat, I cannot approach the question on the same level as someone who has made a commitment to be a vegetarian/vegan/pescatarian/etc. But as someone who does make an effort to be a “locavore” and be aware of the problems with mass-produced food, animal welfare is of the biggest concern. It is my choice to take an animal’s life, and I want that animal to have been raised and slaughtered, as difficult as it is to think about, as humanely as possible.

It was refreshing to hear Dr. Grandin address the problems within the commercial-level food industry, and her propensity to eat local whenever possible.  My biggest takeaway from Omnivore’s Dillemma (new window) and Food, Inc (new window). was that farms can be humane, organically functioning organisms in order to produce better food, better lives for the animals, and a better environment. Temple Grandin’s work provokes questions, but the solution I envision for commercial-level animal “factories”–a return to small, locally run farms–takes more than one woman. Dr. Grandin is operating in the structures society has dictated, and is attempting to resolve the inhumane question, which may never be fully answered. 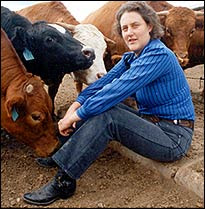 Josh, I went to Temple Grandin to hear about animal welfare, and while her conversation provoked many questions, I ended up intrigued by the other part of her presentation: how she has succeeded professionally as a woman with Autism.

She opened her presentation with what some philosophers say, “that without language there is no thought.”  As Communication, Culture, and Technology students, we are actively engaged in the necessity of language to communicate. Dr. Grandin’s brain instead uses images and pictures as the primary mode of thought. It was interesting to see how Dr. Grandin knew how to communicate with animals and had to learn how to communicate with humans. Yet she actively researched and studied how her brain worked in order to learn and find some understanding that allowed her to be able to interact successfully.

Josh, what were your takeaways from the lecture regarding the perceptions of visual thinking in problem solving and communicating, not only for people with Autism but also for people not on the spectrum?

JH: Well, Colleen, I was particularly fascinated by Dr. Grandin’s description of how her ability to visualize environments enabled her to conceptualize cattle chutes (new window) mentally, then test-run them in her mind and anticipate problems before they became actual. As she described it, one of the hallmarks of the autistic mind is the ability to think in photographically specific terms, as opposed to thinking in ideas or abstract notions. As someone born outside the spectrum of autism, it’s often difficult for me to conceive of things in purely visual terms; I often need to think conceptually before I can think concretely. In this sense, I can entirely see the value of visually-oriented problem solving, not to mention visually-oriented communication. Certainly, the ways in which we think, in which we conceptualize ideas, are intimately bound to the ways in which we communicate. One informs the other, and both are informed by the way we internalize the world around us–whether we’re on the spectrum or off it.